Well, it was that time of year again! Every April or so, at around the time of Easter, the Garvies Point Museum and Preserve, located in Glen Cove, Nassau County, New York, holds it annual “Dinosaur Day”. This is one of the days that I really look foward to for a few reasons. First, I get to work at a place that I absolutely love and meet with some good friends. Secondly, I get to be out of NYC for a little while, which is something that I ALWAYS look foward to. Third, I get to talk about a subject that has fascinated me since my earliest days – paleontology.

Veronica, the museum’s de facto head of administration, did a wonderful job along with other members of the museum staff of setting up the classroom where the day’s major activities would be taking place. Recently, the museum’s library was substantially increased. The Sands Point Museum and Preserve had closed down its library a short while ago, and all of the books and papers were sent to the GPM. I should state, though, that almost all of these documents were originally part of the GPM collections anyway, and they just got them back, that’s all. However, Louis (one of the workers at the Garvies Point Museum, but works primarily at the Old Bethpage Village – another place that I really love) has been working hard to re-catalogue all of these books and papers back into the museum’s database.

The name of the event was somewhat misleading, as it concerned all prehistoric life, not just dinosaurs. We had exhibits on primitive mammal-like-reptiles, dinosaurs, and prehistoric mammals.

Here are some pictures of what the room looked like both during and after the hoards of kids showed up.

Most of the really young children gravitated immediately towards the dino toy area and the fossil digsite. The older children and a lot of the adults were interested in the information that I and others were giving. They were especially interested in Dimetrodon, the famous sail-backed pelycosaur from the early Permian Period. I don’t think that I have ever had to say the name”Dimetrodon” so many times within the course of a single day! It seemed to be the only thing that many of them wanted to talk about!

Some of the major topics of interest on this day were: the Permian Mass Extinction, which occured about 251 million years ago, when an estimate 95% of all life was wiped out; of course, T. rex was a favorite; as too was Allosaurus, who competed with its larger relative for attention from the crowds. This was helped in no small part to the fact that we had a lot of Allosaurus “stuff” arrayed for them: a picture of the skull, a hand model, bone casts, a model, and my drawing which you might recognize from an earlier post on this blog.

Finally, here’s a picture of me, “the Dinosaur Man” as several members of the museum staff call me, dressed up as an amateur paleontologist. In addition to my olive drab Garvies Point Museum shirt, I also wore a khaki utility vest, because apparently ALL paleontologists wear khaki utility vests! I thought that wearing it would help to enhance my ethos with the audience, and by my reckoning, it worked. 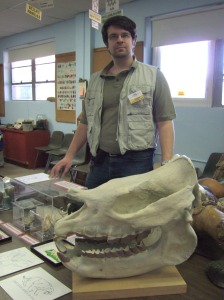