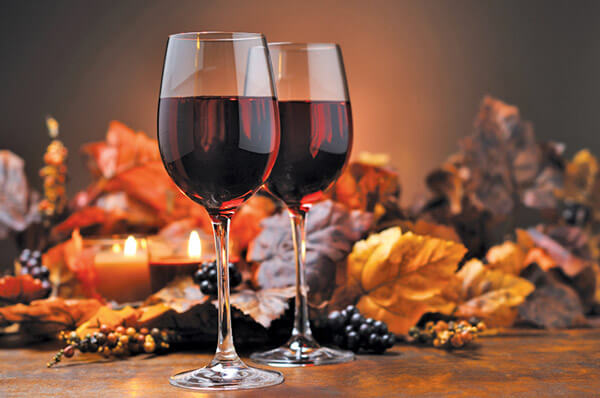 The days are starting to get a bit cooler, with chilly mornings and soft crisp breezes throughout the day. The leaves are changing color and dropping to the ground, and animals are busily stockpiling food for their long Winter dormancy.

In ancient Rome, the changing seasons would, of course, be marked by a social festival. October 11 was the date of the Meditrinalia. The name has been subject to several interpretations, but all of them agree that on this day wine was the main focus of the festivities. The ancient Roman author Marcus Terentius Varro says the following about it:

“In the month of October, the Meditrinalia ‘Festival of Meditrina’ was named for mederi ‘to be healed,’ because Flaccus the special priest of Mars used to say that on this day it was the practice to pour an offering of new and old wine to the god, and to taste of the same, for the purpose of being healed; which many are accustomed to do even now, when they say: Wine new and old I drink, of illness new and old I’m cured” (1).

Roland G. Kent, who translated Varro’s above-mentioned work, states in a footnote for 6:21 that the Meditrinalia took place on October 3, not October 11, and that it was named in reference to Meditrina, who was a goddess of healing. The Fasti Amiternini states that the festival originally honored Jupiter, not Meditrina, who may have been invented by the Romans in later years (2).

The festival might, in fact, have much simpler origins and purposes. The name Meditrinalia means “the festival of the middle of the three” in Latin, meaning that it takes place in the middle of the three months of Autumn. By this time in Italy, the grape harvest has been taken in and will soon be bottled and casked to ferment over the winter. In commemoration of the end of the grape harvest, a wine tasting festival was held to sample the various vintages. At the commencement, an offering of the previous harvest’s vintage as well as some freshly pressed juices were offered to the Roman gods, notably the gods and goddesses of health healing, so that the people could be cured of ailments and to preserve their bodily constitutions over Winter. The cooler temperatures and a lack of fresh food made people in ancient times especially susceptible to sickness during Winter. This was a time before antibiotics, when a simple cough or a case of the sniffles might turn into something serious, like pneumonia. Therefore, calling upon the gods to be free of sickness before Winter properly set in would have been seen as a sensible precaution (3).

So on this day, gather your friends together and cheerfully lift a glass with a toast of “To your health!”

Behold! the tender Autumn flower
Is purpling on the hill,
The roses wither on the bower,
And vanished is the dill.
The morning air is keen and bright,
The afternoon is full of light,
And Hesper ushers in the night
With breezes damp and chill.

The purple harvest of the vine
Is bleeding in the press,
And Bacchus comes to taste the wine
And all our labours bless.
Then bring a golden bowl immense,
And mix enough to drown your sense,
And care not if you soon commence
Your secrets to confess.

For wine a mirror is, to show
The image that is fair,
The friend of lightsome mirth, the foe
Of shadow-haunting care.
So fill your Teian goblet up,
And scatter jewels from the cup,
And drink until the last hiccup
Shall drown your latest woe.

By Jason R. Abdale in History, Uncategorized on October 11, 2019.
← Haplocanthosaurus: An Enigmatic Sauropod from the Late Jurassic Period Get your Roman history book for the holidays! →