When most people hear the words “aquatic reptile”, they usually think of two things: turtles and crocodilians. Some clever people might mention sea snakes, and others might mention marine iguanas. Those who are keen on impressing you may bring up some obscure species like the water monitor, the basilisk lizard, and other species of snakes which venture into water.

In prehistoric times, the list of options that you could choose from was much more expansive. In fact, there were animals around then which aren’t around today which fit into this category. One such group of prehistoric water-going reptiles was known as the “choristoderans” (pronounced as Kore-RISS-toe-DEER-rans).

The choristoderans were a group of semi-aquatic reptiles which lived during the Mesozoic Era. Although not as well-known as other non-dinosaurian reptiles of the Mesozoic such as pterosaurs and ichthyosaurs, they nevertheless shared their environments with dinosaurs for a span of approximately 110 million years and even survived the dinosaur extinction. Choristoderans first appeared during the middle of the Jurassic Period about 175 MYA. The oldest-known genus which is recognizably a choristoderan was Cteniogenys, which measured just one and a half feet long and was very lizard-like in appearance. In life, it probably resembled a small monitor lizard and it likely filled a similar ecological niche. However, the heyday for the choristoderans occurred during the early Cretaceous Period from about 144 to 100 MYA, after which they went into decline. They were fortunate to survive the K-T Extinction, but they were always second fiddle to their crocodile neighbors. Most of the surviving species went extinct about 50 MYA, with the remainder just barely hanging on. The last of the choristoderans completely went extinct around 20 MYA.

The choristoderans belonged to a group of vertebrates called the “diapsids”, meaning that they had two holes in their skull behind each eye socket. Lizards, snakes, crocodilians, pterosaurs, dinosaurs, and birds are all classified as diapsids.

At first glance, choristoderans might be mistaken for crocodiles. However, despite their crocodile-like appearance, they are more closely related to lizards than to crocodiles, at least according to a study made by Mike Lee in 2013 (“Turtle origins: insights from phylogenetic retrofitting and molecular scaffolds”). Their placement in the reptile tree is primarily based upon the structure and arrangement of their ear bones, which is more advanced than those seen in lizards but not as advanced as those seen in crocodilians and birds. Also, the skulls of choristoderans are structurally more lizard-like than crocodilian.

The order Choristodera is divided into four families: Champsosauridae, Hyphalosauridae, Monjurosuchidae, and Simoedosauridae. The more primitive the species, the more lizard-like it is in form. The more derived, then the more crocodilian it is in appearance. The most primitive choristoderans were the monjurosuchids, which looked similar to the modern-day Water Monitor Lizard (Varanus salvator). Even at this early stage in their development, there is fossil evidence that some species like Monjurosuchus possessed webbed fingers and toes. Already, they were adapted to living a semi-aquatic lifestyle.

Even more advanced were the hyphalosaurids, which bear a remarkable resemblance to the earlier nothosaurs and thalattosaurs of the Triassic Period. Form tends to follow function in evolution, and these creatures almost certainly led a similar lifestyle. The act of species from completely different groups evolving into more-or-less the same shape is called “convergent evolution”.

The champsosaurids and the simoedosaurids are the most crocodile-like in appearance, and together they form the super-family Neochoristodera. Like crocodiles, these creatures were almost certainly living as shallow-water ambush predators, fitted with long slender jaws lined with small conical teeth. Like modern-day gharials, they may have been primarily or even exclusively fish-eaters.

Probably the most famous choristoderan genus was Champsosaurus (pronounced as CHAMP-so-SORE-us). It first appeared about 90 MYA during the Turonian Stage of the late Cretaceous Period, persisted through the K-T Extinction, and finally went extinct during the Paleocene Epoch of the Tertiary Period about 56 MYA. Impressive. Most genera don’t last that long.

Champsosaurus was named by the famed paleontologist Edward D. Cope in the year 1877. Despite not having an easily-recognizable name (most members of the general public have likely never heard of it), it has been rigorously studied by paleontologists ever since then. For example, three academic articles were published about it just in the year 2010, and another article was recently published in April 2020. So, from an academic standpoint, interest in this animal has been pretty consistent.

Champsosaurus appears to have been able to tolerate both freshwater and saltwater environments. Fossils of a species called Champsosaurus laramiensis have been found in rocks from the Fox Hills Formation, a geological layer which represents a coastal or estuary environment on the edge of the Western Interior Sea. Fossils of mosasaurs and dinosaurs including Tyrannosaurus have also been found in these rocks.

Preserved skin impressions show that, unlike many lizards, choristoderans like Champsosaurus did NOT have overlapping scales. Instead, the skin consisted of tiny non-overlapping scales, with no crocodile-like dorsal scutes, giving it a very smooth-skinned appearance when seen from a distance.

Unlike crocodiles, which have their nostrils on the top of their upper jaw, Champsosaurus had its nostrils on the front tip of its upper jaw. Perhaps they would use their long nose like a snorkel, sticking just the tip out of the water’s surface in order to stay as concealed as possible.

Champsosaurus had a pair of long thin gharial-like jaws lined with tiny conical teeth. Because of its close affinity towards lizards than to crocodiles, it is highly likely that Champsosaurus had lips and a fully enclosed mouth. But that’s just speculation based upon phylogenic relationships to other reptiles. In terms of hard physical evidence, the teeth themselves are quite small, and are inset from the edge of the jawline rather than standing on the rim of the jaw like a crocodile. This suggests that Champsosaurus had lips covering its teeth like a lizard, unlike crocodiles which don’t have lips.

Compared with crocodilians, the eye sockets of choristoderans are positioned much further forwards on the skull, located halfway or two-thirds of the way back from the tip of the snout. This provides more space for jaw muscles, and the temporal fenestrae (the holes in the back of the skull that accommodate the jaw muscles) were very large in proportion with skull size. Champsosaurus, in particular, had very large temporal fenestrae, which indicates that it had strong jaw muscles and could quickly snap its mouth shut within a fraction of a second – an important adaptation if your diet consists primarily of small fish.

Unlike lizards, Champsosaurus might not have had external ears. Analysis of its skull structure shows that Champsosaurus had internal ears, similar to turtles. This is an important adaptation if you are spending much of your life in the water. Therefore, you would not have seen a pair of ear holes on a Champsosaurus head. Instead, there likely just would have been a slight depression (or maybe not even that) on the side of the head marking where the tympanum (the part of the ear that vibrates in order to make a sound) would have been.

If you spend much of your life in the water, walking really isn’t an issue. Therefore, the limbs of choristoderans are not well-developed. In fact, the more “advanced” the species, the weaker its limb bones appear to be. Champsosaurus is no exception to this – its legs are downright puny in comparison with its body. The bones that make up the arms and legs are short and stumpy, and the hands and feet are small, although the feet are noticeably bigger than the hands. The fingers and toes are thin and end with very tiny claws. This was an animal that would have had a hard time pushing itself onto land. However, there is some evidence that females had more robustly-built limbs than the males due to the need to haul themselves onto land in order to lay their eggs.

The tail of Champsosaurus was flattened, and looked more like that of a crocodile or even a mosasaur than to a lizard. Even so, this animal was definitely not a power-swimmer. If it was, then one would expect the tail to be both longer and broader. Instead, the tail seems to be peculiarly under-developed. Keep in mind, though, that this was likely not an animal that was actively chasing after its prey. If all it was doing was hunkering down on the bottom of a lake or river and waiting motionless for fish to carelessly swim by, then it doesn’t need a well-built tail that’s designed for plowing through the water. 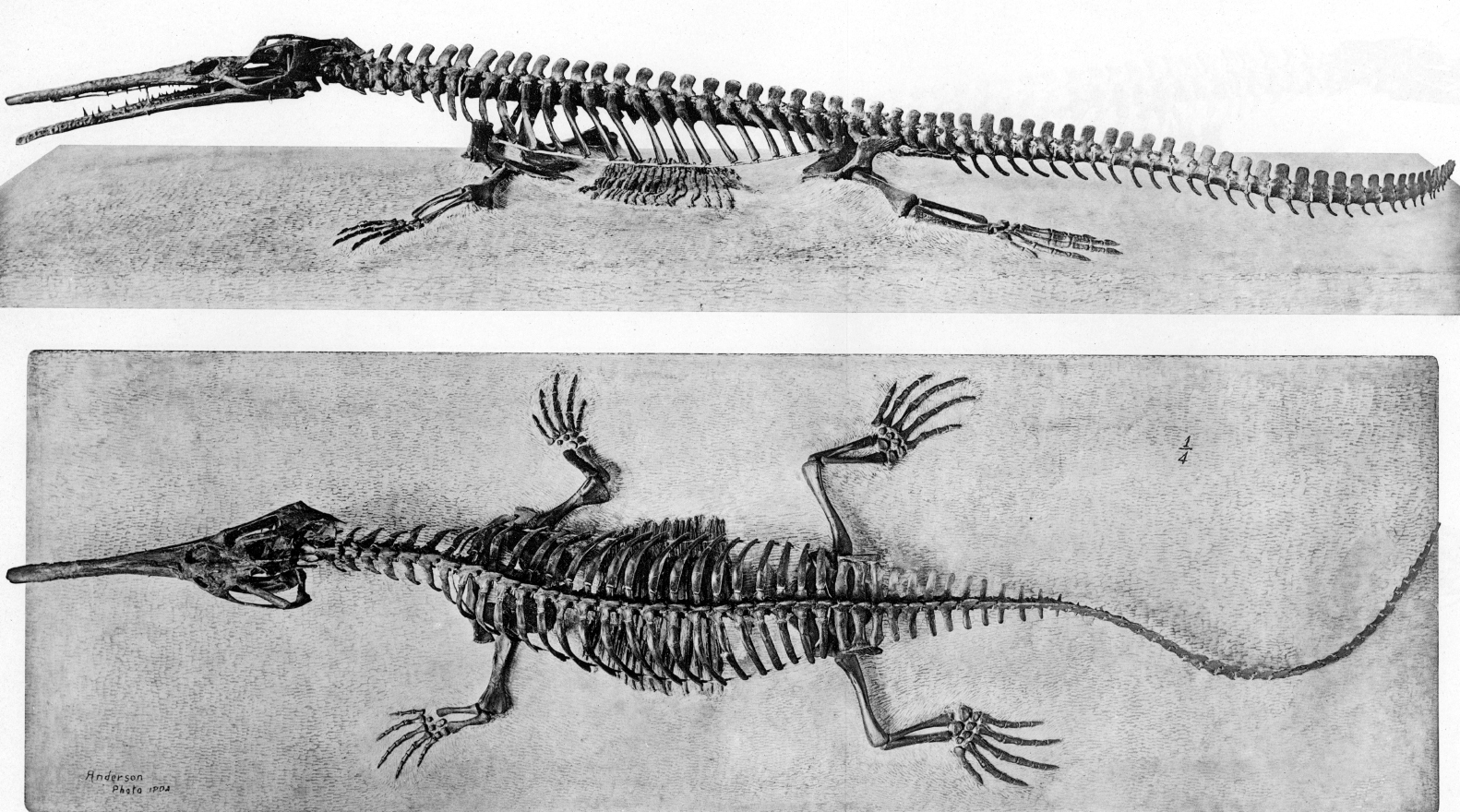 Skeleton of Champsosaurus laramiensis. From “The Osteology of Champsosaurus”, by Barnum Brown (1905). Memoirs of the American Museum of Natural History, volume 9, part 1. Public domain image. http://commons.wikimedia.org/wiki/File:Large_williston_champsosaurus.jpg.

Below is a drawing made of Champsosaurus laramiensis drifting about in a murky pond or stream somewhere in Montana during the late Cretaceous Period. This five-foot-long piscivore would have shared this environment with alligators, crocodiles, turtles, large freshwater fish like gars, sturgeons, and bowfins, and of course dinosaurs like Triceratops and Tyrannosaurus. The drawing was made with No.2 pencil on printer paper.

Like Loading...
‹ July 15 – The Equitum Romanorum Probatio and the Lusus Troiae: The Public Exhibitions of the Ancient Roman Knightly Class
August 13 – The Feast of Pomona, Goddess of Fruit ›