The Presence and Usage of Osteoderms in Dinosaur Paleo-art

Many times, paleo-artists take a feature that was found in a few species and ascribe it to entire groups. One of these trends is to portray osteoderms on the bodies of dinosaurs in their artwork. The word osteoderm literally means “skin bone”. These are small pieces of bone which are embedded in the skin, and sometimes protrude out of it so that they look like bony bumps on the dinosaur’s body. Evidence suggests that they were often covered with a keratinous scute. The most prevalent example of dinosaurs possessing osteoderms is a group called the thyreophorans, meaning “shield-bearers”, which includes the stegosaurs and ankylosaurs, but other dinosaurs have them too. At least one titanosaurid sauropod, Saltasaurus, has been found with osteoderms, and it is believed that possibly all titanosaurs had osteoderms as well.

One contentious issue regarding osteoderms is their presence in theropods, or rather, in artwork depicting theropods. There is a tendency among paleo-artists to adorn the bodies of theropod dinosaurs with rows of small osteoderms along their neck, back, and tail, and I too have been guilty of this practice. However, as far as I am aware, only one theropod dinosaur has been found with osteoderms: Ceratosaurus, which lived in western USA and possibly Africa during the late Jurassic Period. Some sources that I have seen state that Carnotaurus, an abelisaur which lived in Argentina during the late Cretaceous Period, also possessed osteoderms, but this is an error. While the excellent skin impressions of Carnotaurus show rows of raised bumps running horizontally along its neck, back, and tail, these bumps did not have a bony core, so they technically cannot be classified as “osteoderms”. In terms of appearance, Ceratosaurus was found with a single row of small osteoderms running down the middle of its back (NOT multiple parallel rows, as is often shown in some works of paleo-art), extending from the back of the skull and running all the way down to the tip of the tail. 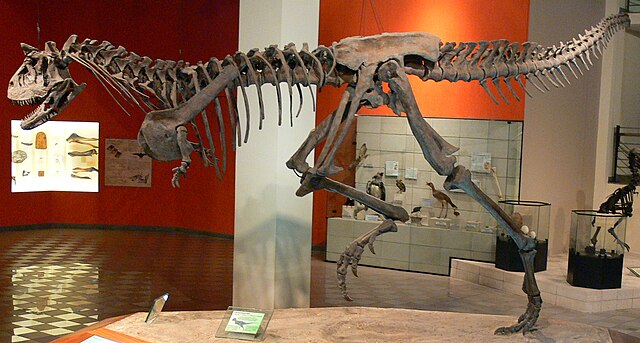 Some paleo-artists have a tendency of taking a feature found in one or a few specific animals and ascribing this feature to the entire sub-group of dinosaurs. For example, a few paleontologists and paleo-artists believe that many and perhaps all sauropods had a row of keratinous spines running down the neck, back, and tail just because ONE specimen of Diplodocus was found with them. While this proves that this particular species and possibly the genus had this feature, it does not mean that all diplodocid sauropods had these keratinous spines, and it certainly doesn’t prove that all sauropods in general had this feature. The same goes for theropods. Many paleo-artists place either osteoderms or dermal scutes (also known as “feature scales”) on their meat-eating dinosaur’s bodies simply because these features have been found in association with two carnivores, and they decided to put them on virtually every theropod that they drew or sculpted.

Extrapolation is no sin. There’s nothing wrong about making an observation about something and suggesting that something else which was similar may have had identical properties. Writers and researchers do it all the time. However, I should warn people out there that there are varying degrees of extrapolation. It’s one thing to make an observation based upon the fossils of these two dinosaurs, which, as I stated before, came from the same theropod sub-division, and assume or hypothesize that other species within this particular group may have had this feature as well. It is quite another thing to take that feature and apply it to every theropod genus from Eoraptor to Velociraptor.

But what about “scutes” on dinosaurs? The term “scute” has two definitions: either it is the scale-like covering over an osteoderm, or it’s simply an unusually large thick scale. Preserved skin impressions from multiple species have shown that some dinosaurs had rows of large, thick, texturally-pronounced scutes arranged on their bodies, but these scutes did not have a bony core – therefore they can’t be classified as “osteoderms”. Examples of animals that have this feature are the stegosaur Hesperosaurus and the ceratopsian Chasmosaurus.

I may sound like I’m being self-righteous and pontificating, but I too am guilty of making wild extrapolations and assumptions when it comes to my prehistoric illustrations. A few years ago, I did an anatomical study of Tyrannosaurus rex in a running pose, and I had it with osteoderms, for no other reason other than so many other paleo-artists had pictured T. rex with osteoderms in the past. I followed the crowd and illustrated my T. rex accordingly. However, later on when I read about tyrannosaur skin impressions, I learned that these large tyrannosaurs had small pebbly skin with no osteoderms. Consequently, I revised my drawing, which you can see here. Another example of where I might have made a mistake is in my drawing “Giganotosaurus head study”, which was showcased in an earlier post on my blog; you can see it here. The reason why I had put those rows of bumps on its neck and a few on its jaw was because at the time I thought that Giganotosaurus was an abelisaurid like Carnotaurus. I later learned that it wasn’t, but I didn’t want to change the picture – I think it looks nice as it is. However, I’ll be sure to learn all of the information that I can about a certain subject in the future before I draw it.

What I’m trying to do here is caution paleo-artists and aspiring paleo-artists about the dangers of making wild assumptions and extrapolations. Do your homework, do your research, and illustrate your creations as best as current science allows, and don’t do anything that you aren’t able to back up with researched facts and/or persuasive arguments.