Home › History › November 1 – The Kalends of November: The Month of the Hunt

November 1 – The Kalends of November: The Month of the Hunt

It is now November. The cool crisp breezes skim through the air, wafting the scents of pumpkin spice and apple cider, while the leaves on the trees are ablaze with the full glory of the Autumn colors. Halloween has come and gone, and people are increasingly turning their attention towards the upcoming holiday season. Other people might be thinking more of the upcoming hunting season, as their imaginations delight in the prospect of bringing home a prize 8-point stag to roast over an open fire.

In ancient Rome, too, people’s minds turned towards other matters with the beginning of November – namely, gathering enough meat to tide them over during the Winter lull. October may have been the harvest season, but November was the hunting season.

Like all months in the ancient Roman calendar, the first day of each month was known as the Kalends, which is where we get the word “calendar” from. The first day of every month was dedicated to Juno, the queen of the gods, who was the Roman equivalent of the Greek goddess Hera. In addition to specific days being dedicated to this god or another, entire months were also dedicated to various deities. In ancient Rome, the month of November was dedicated to Diana, the goddess of the hunt (1). She was the Roman equivalent of the ancient Greek goddess Artemis, the goddess of the hunt, the moon, the wilderness, and wild animals. 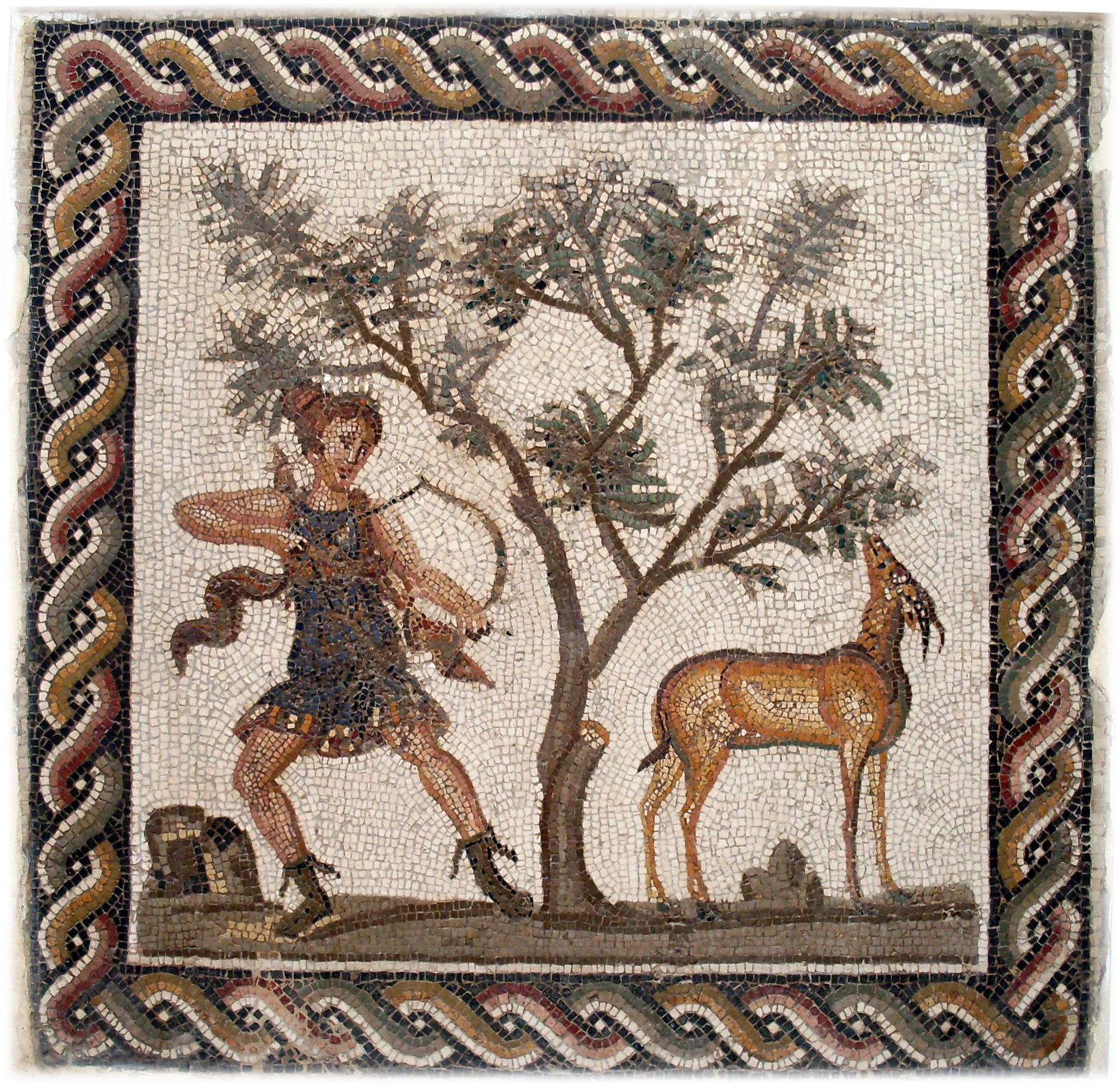 According to the ancient Roman poet Marcus Manilius in his book Astronomica, each month had a god or goddess assigned to it who would be responsible for regulating the movements of the Zodiac constellations which would appear in the sky during that time. As such, the Roman goddess Diana was associated with the astrological sign of Sagittarius the Hunter, which is understandable given her chosen profession (2).

With Autumn half-way over, and with Winter approaching soon, people needed to think seriously about stocking up their food supplies. It was usually in November and December when farmers slaughtered their livestock and prepared the meat for Winter storage. Nowadays, people can eat meat during any time of the year. However in earlier times, even as recently as the middle of the 19th Century, your options as to what you could eat and when you could eat it were much more limited. Your diet was dictated by the seasons, and meat was almost always something that was eaten during Winter.

In an age without refrigeration, keeping your meat edible was a big concern. Two common methods for preserving meat were salting and smoking, but even these didn’t help much if the weather was hot and humid. In warm or wet weather, meat spoils quickly, even when it has been cured. It must be said that the curing process does not prevent the meat from spoiling – it just delays it. All food will go rotten eventually. To minimize the threat of bacterial contamination, farm animals were often eaten completely on the day that they were slaughtered. Anything that was not eaten would be given to neighbors or to your servants or slaves, if you had any. Considering that some animals are rather large, eating a whole sheep or a whole pig was usually something done for a big family or during a community celebration, such as religious feast days or social holidays.

The only way that you could be sure of safely storing your smoked or salted meat for prolonged periods of time was by having it only during the coldest time of the year. The cold temperatures acted like a natural refrigerator, decreasing the likelihood of bacteria spoiling the meat, and it also kept the flies away. Therefore, it was in late Autumn or early Winter that farmers butchered their pigs, goats, and other livestock, and when hunters ventured into the wilderness in search of rabbits, deer, and wild boars. Understandably, Diana, the wilderness goddess of the hunt, would need to be especially propitiated during this time in order to gain her favor, and that’s the reason why the ancient Romans dedicated the month of November to her.

The ancient Roman writer Marcus Terentius Varro reports in his work De Re Rustica, “Of Countryside Things”, that some wealthy men had private hunting preserves on their vast estates where rabbits, deer, and wild boars roamed. He also claims that these same men had fish ponds – some freshwater and others saltwater – where they raised pike, lampreys, mullet, and goldfish. There were also bird aviaries, rabbit warrens, and beehives. In his book, he states “Nowadays people enclose many acres within walls, so as to keep numbers of wild boars and roes” (3). Varro goes into further detail on these private hunting preserves. He reports that a man named Quintus Fulvius Lippinus, who had an estate near the Etruscan city of Tarquinii, had a private hunting preserve measuring forty jugera in area (approximately twenty-five modern acres), upon which were rabbits, red deer, roe deer, and wild sheep. Another man named Titus Pompeius had a private hunting ground in Cisalpine Gaul (northern Italy) which was so large that it was measured in square miles rather than square acres (4).

Maintaining these private hunting grounds needed some careful planning, as Marcus Terentius Varro explains. Simply having a fence would not do – you needed to have a brick or stone wall which was covered with plaster, forming a smooth uniform surface, so that no weasels or other animals could squeeze through. It also had to have a deep foundation so that animals could not burrow underneath it, as well as be high enough to prevent the animals from jumping over it. Depending upon which animals you wished to keep, certain particulars needed to be put in place. For raising rabbits and hares, Varro explains, you should have several covered places for the animals to hide, with lots of bushes and grass for cover, along with numerous massive trees with wide-spreading branches to prevent eagles from swooping down. Only two male and two female rabbits would be sufficient, because in a short time the whole preserve will be full of them (5).

As for wild boars, Varro reports that they could be kept in these enclosures without much trouble and will readily eat whatever they can scrounge (6). It is a statement that most pig farmers and boar hunters will concur with – pigs are remarkably adaptable animals, able to survive and thrive in a multitude of environments, although they appear to have a particular fondness for wooded areas. If domesticated pigs manage to break out of their barnyard pens and escape into the wilderness, they revert back to their original wild state surprisingly quickly. 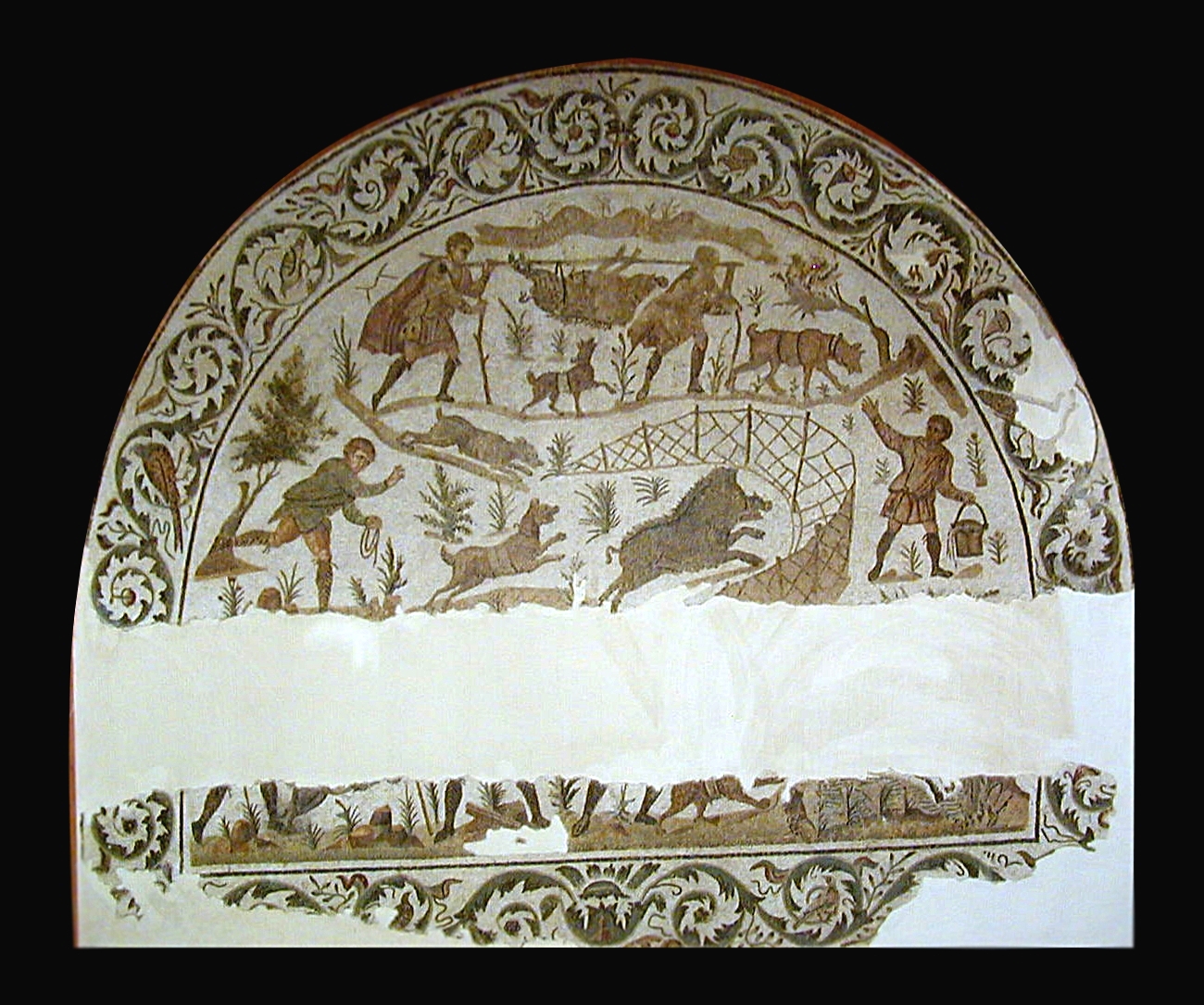 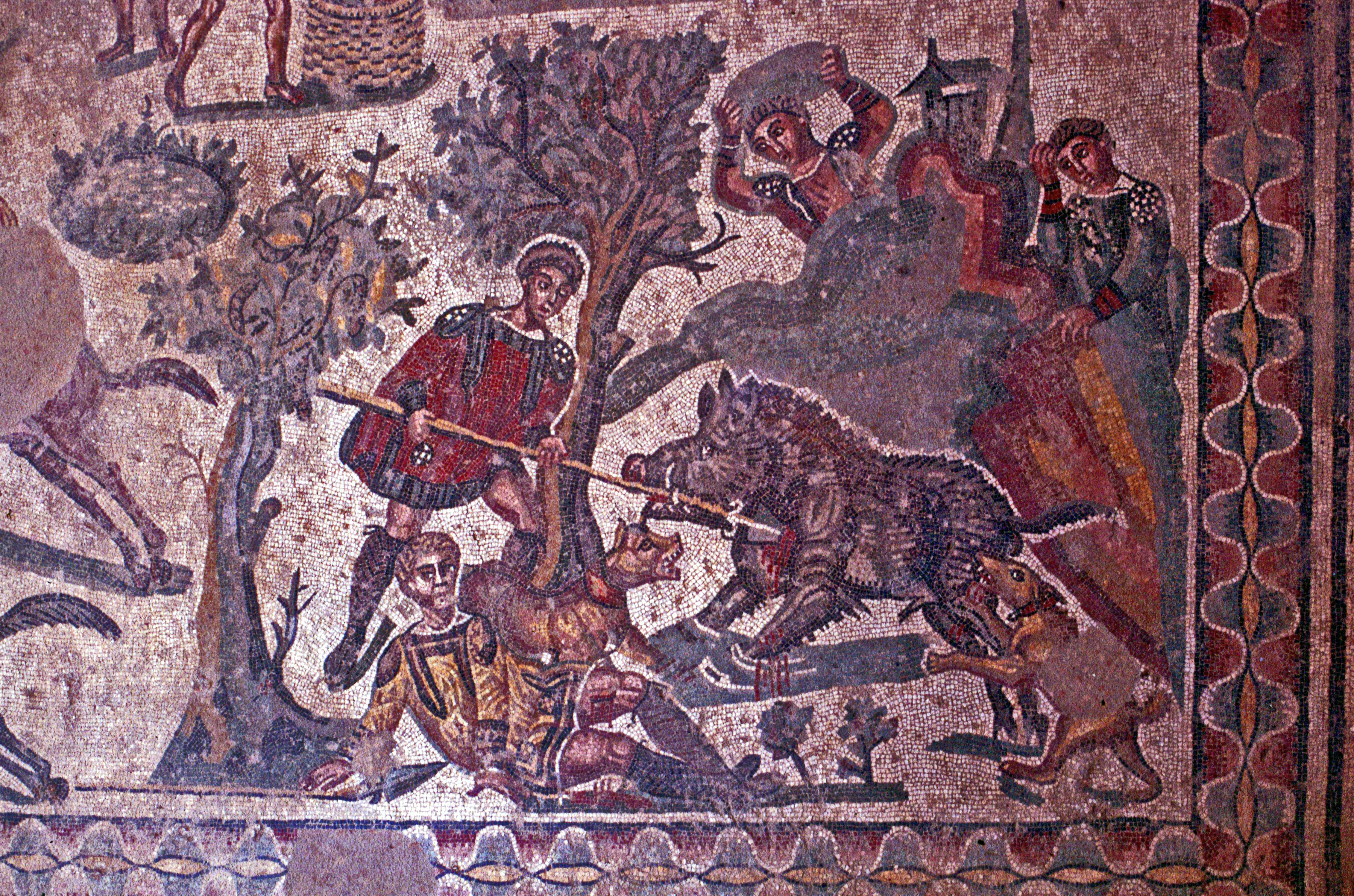 One favored way of hunting the wild boar in the Roman Empire was by impaling it with a spear. But this wasn’t your basic everyday pole-arm; this was a weapon that was specifically designed for this task. In my book The Great Illyrian Revolt, I wrote the following passage concerning the kinds of spears that the Illyrian warriors carried in battle…

“The word that the Romans used…was venabulum, the Latin word for “hunting spear”, although the word literally translates to “an instrument used in hunting”, which could mean anything. Hunting spears are differentiated from combat spears by being typically fitted with larger-than-average heads which are used to take down large and dangerous prey like lions, bears, and especially wild boars. In fact, during the Middle Ages, these kinds of spears were called “boar spears”. In addition to having larger heads, they are also fitted with a cross-guard at the base of the spearhead to prevent the spear from digging into the animal so far that it penetrates the animal’s body up to the shaft. The ancient Roman venabulum looked remarkably similar to medieval and modern hunting spears, and they were a common tool used by the bestiarii, the “beast men” who fought against wild animals in the arena. The only difference between the ancient and medieval versions which I can see is that the crossguards on the Roman spears are V-shaped with the two points directed towards the front, while on the medieval ones they are fashioned into a straight horizontal bar” (7)

Varro also provides an anecdote that one fellow, rather than searching out for animals to hunt, had trained the wild animals to come to him! A man named Marcus Pupius Piso had an estate outside the town of Tusculum, and within this property was erected an elevated platform. From here, Piso would blow a horn, and then throw food down to the ground for the wild animals to eat. Like Pavlov’s dogs, the animals within this preserve came to associate the sound of the horn with food, like ringing a dinner bell. After a time, whenever he blew the horn, the animals would immediately emerge from the woods and walk towards him, expecting to find their next meal scattered on the ground below his tower. However, they were now an easy mark for Piso’s bow and arrow (8).

Like Loading...
‹ An Ancient Academic’s Rant: My Gripes with Antiquarians of Prior Centuries
November 24 – The Brumalia: The Ancient Roman Winter Fest ›